In recent years, the Polish „Dożynki” Harvest Festival has become increasingly popular among American & Canadian Polonia. However, no Harvest festival can compare to the Orange County Onion Harvest Festivals that were held years ago in Pine Island, New York. 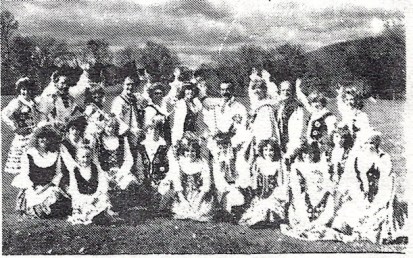 The Black Dirt Region, known as the Onion Capital of the World, still has it’s annual Onion Harvest Festival, but it is pretty much like all the other the festivals in the northeast.

In the past, it was so much more: A Woodstock-like outdoor celebration,  beginning with a float Parade; the crowning of a Queen and her court; a Mass; presentation of the wreath to the Lord and Lady of the Manor; Polka dancing; Polish cuisine; and more than 250 locals, young and old, dressed in home-made Polish costumes, performing traditional Polish folk songs and dances.

The Orange County Onion Harvest Festival began in 1939, and was held every two years or so, on a farm in Pine Island. It took all that time for the community to prepare. There was, however, a long gap between the 1964 festival (attended by over 30,000 people),  and the next one in 1983, when the tradition began again… and was bigger and better than ever! I was originally planning to dance in that festival, but ended up doing a news report on it instead:

1989 marked the 50th anniversary of the Onion Harvest Festival.

1999 was the Onion Harvest Festival’s 60th anniversary, and featured some dancers from an actual Polish folk dance ensemble mixed in with the locals.

The Moral of the Story is that, while these days, the festival lasts just one day,  it is still great fun, as are all the Dożynki Festivals!!  After all, they feature:  performances by Polish Folk Dance troupes, mixed in with polka dancing and great Polish cuisine!!