I remember sitting in a friend’s apartment in Los Angeles, watching Zahi Hawass  in a galabeya, sort through slides for an upcoming lecture at UCLA.  He gets called away to the phone, a female admirer is on the line.  Oh, yes, he has many.  Zahi is very charismatic. He always says your name, he makes you feel like you are a long-time friend, he sends you greeting cards.   But the real appeal of Egypt’s Director of the Supreme Council of Antiquities is his “passion”.  His passion for his work…. preserving and restoring the magnificent monuments of Egypt. 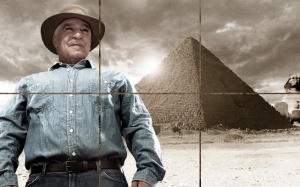 The History Channel reality show, Chasing Mummies follows Dr. Hawass on various archaeological digs.  He makes new discoveries, and explains the significance of other finds.  And, he yells a lot !   Well, that is the way of the reality show isn’t it?

I have always known Zahi to be affable, but it is natural for someone with “passion” to shout once in a while.   But these brief outbursts should not put you off from watching this marvelous program.  Nor should the antics of some of the interns who are there to assist and learn from the master.

What this show is all about is Egypt, and history, and discovery.   I have traveled all over the world, to many exotic places, but none can compare to the wonder that is Egypt !  And so, I keep going back again and again, and when I cannot be there, I am thankful that there are TV programs like Chasing Mummies, which transport me to Saqqara, and Giza, and Dashur, and Luxor, and Abu Simbal.

I never saw the point of reality shows and never watch them, except of course for Dancing with the Stars.  That program is different in that it demonstrates that everyone has the ability to dance like Fred Astaire and Ginger Rogers.  It also shows the benefits of  ballroom dance… not only the pleasure you get from getting all dressed up and dancing to music you love, but other benefits as well:  physical fitness, relaxation, social interaction, a sense of accomplishment, even romance.

(Dancing with the Stars clip)

Chasing Mummies is also a different kind of reality show, in that it “really” shows you what it is like to be on a dig.  Plus, you get to see some of the exquisite artifacts that are there, waiting to be unearthed.

Egypt’s history spans over 5,000 years.  The pyramid builders of the Old Kingdom go back to 3100 BC, Middle Kingdom pharaohs like Ramses the Great were around in 1300 BC, and the Ptolemies, like Cleopatra VII, about 300 BC.  But the period of Egyptian history that I love the best is the late 19th century A.D.!! … the age of the Egyptologist.

Imagine,  sailing down the Nile, riding through the desert, crawling through pyramids, clearing away the rubble as you enter the tombs of the long dead pharaohs, and looking on the beautiful face of a queen painted on a wall, or the chiseled features of a pharaoh on a statue 70 feet tall.

Dr. Zahi Hawass is a brilliant scholar, and is generous in allowing his brilliance to reflect on those around him.  We all cannot be lucky enough to be personally escorted through the tombs and monuments of Egypt, so he is doing the next best thing with Chasing Mummies. Dr. Hawass is taking us on a journey through the sands… and the sands of time.

The Moral of the Story is that if you look beneath the surface, you will uncover the mysteries of the past.

19 Responses to Beneath the Surface